Every widow deals with loss in her own way. At first it’s impossible to imagine a life without unending grief. Another life? How to get through this one? My way won’t be everyone’s way. I didn’t take the well-meaning advice to “move on” after a few months. Instead, I moved backward. For me, that was the right direction.

My husband and I joked about death, but even in my 70s, I wasn’t quite ready for it. The day he died, his favorite salmon recipe was out on the kitchen counter, ready for him to make for Saturday’s dinner. On Wednesday we were supposed to be meeting friends for drinks. It was on the calendar, along with his Tuesday dental appointment. So this couldn’t be happening. Couldn’t have happened.

But it did. A stroke erased all those dates on the calendar. My husband would not cook the salmon, drink the wine. He wouldn’t drive to the dentist’s office or attend a concert scheduled for next month. None of these things would happen.

I was alone and beyond tears—or else I didn’t dare shed them yet.

My children and grandchildren held me tight. They stood by while I called Social Security and Medicare. They went with me to the bank, helped me cancel his accounts. Friends came over with casseroles and brownies. The far-away ones called or wrote. Days turned into a week, two weeks. For a long time, he didn’t appear in my dreams, because he was so present in my waking life. Each day I went about my business, and when I returned, I shut the front door and listened unwillingly to the silence surrounding me.

A service? Memorial? I wasn’t there yet.

The night my husband’s body was taken away, I moved to his side of the bed and I felt his presence. The next morning I made the same amount of coffee I had always made. I held out the cup to him. “Here’s to you, sweetheart,” I said, “wherever you are.” So what if I had to throw away the extra?

I have friends who lost all interest in food when their husbands died. That didn’t happen to me. We cooked together nearly every day of our marriage. That part of our life together was gone, but I continued to prepare the meals we both had loved. I talked to him as I chopped, sautéed, mixed, baked-- and I ate every bite—even through tears. When I tried out a new recipe, I read it aloud, as if he were beside me in the kitchen. What did he think about red peppers versus celery? I’d ask, or a double amount of ginger? One-sided conversations have their limits, but I recommend them; they’re better than no conversation, and you can figure out any response you like. And each time I spoke to him, I felt my husband’s presence.

I did not hide my grief. I took my favorite photo of him everywhere I went. I showed it to the people behind the counter at our favorite coffee shop and asked if they remembered him. Of course they did. They held my hand and told me how special he was, how sorry they were he was gone. I showed that photo to the people at the auto repair shop, the outdoor lot where we bought our Christmas tree, the guys at the hardware store. I showed it to neighbors, and to the librarians at our local branch, the wine merchant, the woman who cut his hair, and our favorite supermarket checkers—all of whom were part of the web of our lives. They all remembered my husband, had liked him, shared bits of their lives with him, talked with him about books, wine, house projects, and politics. Through these conversations, I was learning to see new sides of the man I knew.

The front garden had been my husband’s pride and joy. Passers by watching him plant, weed, and water, told him how much they loved his flowers. Now they saw me standing among the irises, with no idea what to do. Unlike his, my thumb was stubbornly brown. I knew I needed to honor him by honoring the garden, so with a neighbor’s help I learned to care for it, bringing closer to myself a part of him I hadn’t known.

Three days after he died, after an hours-long search, I couldn’t find one of his credit cards. So I stood up and spoke to him. “I’ll only ask once. But you’ve got to help me find your Visa card. I’ve looked everywhere. Please—show me where it is.”

And he did, leading me straight to a box in a drawer I had never thought to search. Friends recounted similar experiences: a navy widow finding her husband’s missing dog tags, which she needed to receive benefits; a woman seeing her newly dead father drive by in the family car, waving and smiling at her. An insistent warning from a dead father to his daughter skidding on an icy highway: “Take your hands off the wheel.”

“Don’t tell me there’s no life after death,” one of these friends said, her voice flat with certainty.

Earlier, I would have scoffed at such tales, but I’m now convinced that when the dead stick around for awhile it’s because we need them to—or because they need to. For months I felt as though my husband was in the next room. Not letting him go, he lingered, unseen and unheard, as though he knew I wasn’t ready for him to leave; in so doing, he helped me come to terms with his eventual final departure.

I wanted to make his obituary count. My oldest daughter, my husband’s daughter, and I collaborated, trying to bring him alive with our words, capturing as best we could his humor, his quirkiness, his kindness, his gifts, his whole being. I gave copies to our doctor, our dentist—all those who didn’t come to the memorial service, but who touched his life in some way—or who never met him, but whose lives touched mine. “He sounds like quite a guy,”  they always said.

At some point, maybe after eight months or nine months, no resonance sounded in the air when I spoke to him. He was gone. The silence in the house became unbearable. That’s when an unexpected gift came to me: a black cat I wasn’t looking for and at first refused. But the cat made himself at home before I had a chance to give him back. He greeted me at the front door. He jumped on my lap and slept beside me at night. He was polite and playful, no fair trade for a husband, but someone to care for and talk to: a roommate. I figured a live cat— interesting, querulous, and affectionate—beat walking into an empty house.

My cat became a bridge to the life I knew I must rejoin, now as a single woman.  One day I looked up and noticed my daughter had a new haircut (she’d had it for some time, she reminded me). My grandson was preparing for his cello recital. Could I help him with practice? A good friend was leaving her husband. There were other people in the world besides me, I realized, and I needed to pay attention. I’d been given help. It was time to give back.

It was hard in the beginning to deepen the connections I had and open myself to new ones. And it was hard to learn to enjoy doing things alone. When no one was available, it was tough to convince myself to attend concerts and plays anyway, to take myself to the art museum, when my best companion was no longer there to say, “Come and look at this!”  It was hard to go dancing without my favorite partner, hard to invite coupled friends to dinner.

But in time it got easier.

Hesitant at first, I traveled with a choral group to sing in eastern Europe and found new friends, and discovered I could laugh again. My husband had never been a singer, wouldn’t have come with me anyway; and while I missed writing to him, I didn’t miss his presence. I sang for the love of singing with others who also loved to sing. Someday, I came to think, I might even meet someone else I could love.

Grief has always been a part of life, but now, when this pandemic is taking so many people from their loved ones, I know that what I’ve experienced over the past few years is being multiplied in hundreds of thousands of homes across the country. To those who are bereaved, I can only say that while you will always grieve the loss of someone you love, the nature of your grief will change. From focusing only on your own sorrow, grief will mutate to sadness, and an acknowledgement that death is part of life. You will still think of them every day, but you’ll know that you have a life of your own, and with luck, time to make the rest of it count. 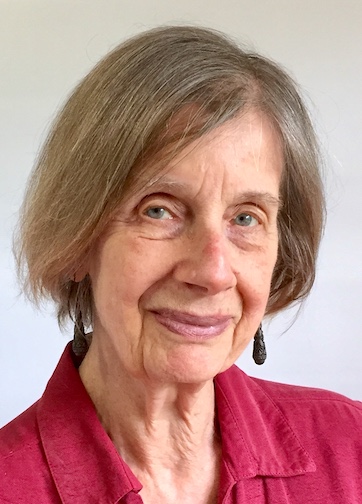 Lee Haas Norris is a transplant from Portland, Maine to Portland, Oregon and is still not sure in which Portland she belongs. She is an English Country dancer, choral singer (Portland Christmas Revels), recorder player (Medieval and Renaissance music), avid reader, and mother and grandmother. She and her late husband served in U.S. Peace Corps late in life, went on to teach in the Czech Republic, and travel throughout Europe via home and work exchanges. She recently went to Bosnia to sing with the choral organization, Village Harmony. A writer and journalist for much of her life, Lee's recent work has been published in The New York Times, WA Post, Boston Globe, Literary Bohemian, Passager, The Gettysburg Review, Persimmon Tree, and several other publications. 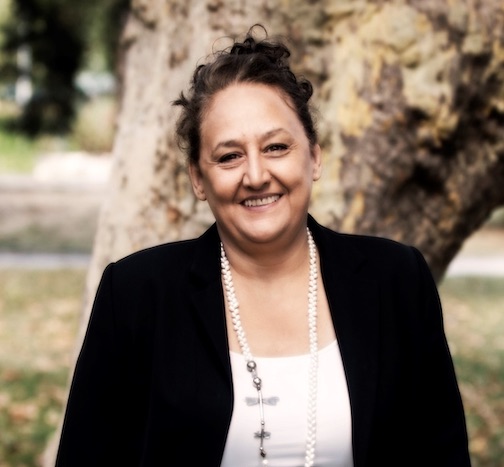 A Day in the Life of Natalia Blagoeva, Founder and Wellness Ecosystem leader, Zurich, Switzerland

We need to move away from our habits of jumping from one social media to another, filling our senses with unnecessary, as well as fake, information and getting subjected to the intricate ways in which advertisers use the latest science and technology to influence us. 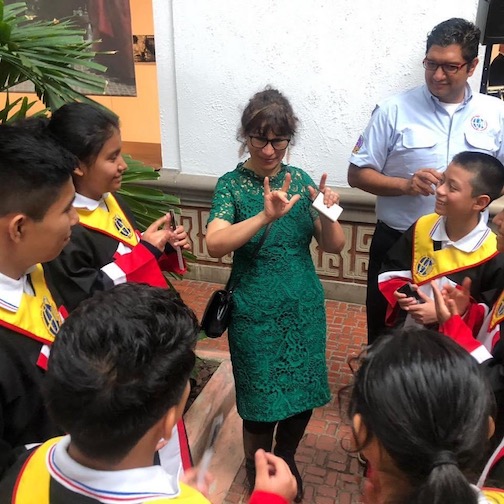 A Day in the Life of Pamela Molina, Executive Director of the World Federation of the Deaf (WFD)

"I want people to understand that Sign Languages are full and actual languages, the natural and native language of mainly visual persons." 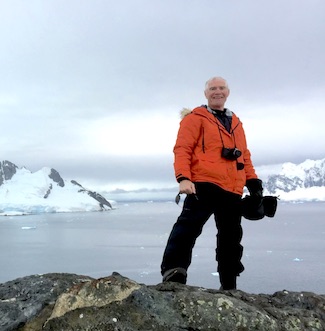 A Day in the Life of Jeff Thompson, Chief Executive Officer Emeritus at Gundersen Health System, Wisconsin, US

"I believe trust is critical to the effectiveness and efficiency of any good colleague and any good leader."